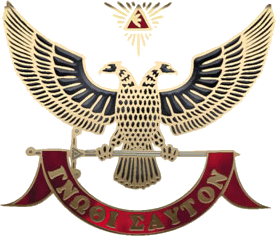 FOUNDING DECLARATION OF THE SUPREME COUNCIL
AT THE ZENITH OF ATHENS ON DECEMBER 14, 1996
1. We, Freemasons of due form, holding the 33d and last degree of the Ancient and Accepted Scottish Rite, following the Grand Constitutions of Freemasonry of 1786, as these were revised in 1875 and in keeping with the tradition of International Mixed Freemasonry, which we received in sacred trust from our forefathers who were Freemasons, gathered together today, on December 14, 1996, at the Zenith of Athens in common and unanimously decided the founding of the:
INTERNATIONAL MIXED ORDER
under the distinct name
"DELPHI"
and the formation of the
SUPREME COUNCIL OF THE 33º
2. By the founding of the International Mixed Order "DELPHI," our purpose is to tender to its members the leadership and the spark so that they may continue working for the good of individuals and all of Humanity.
3. Therefore, we wish to remind all that our Order has a continuous intellectual life of 70 years (from 1926 to 1996) and was structured as the Greek Confederation was functioning in liaison with the International Order "LE DROIT HUMAIN" based at the Zenith of Paris.
4. We express our certainty that the newly founded "DELPHI" International Mixed Order, as an independent, self-governing, and sovereign entity, will be able to come up to the vision of its founders in the matters of unhindered, effective, and creative action in the intellectual, social and international field, and especially by the activation of its members so that they may pass the torch of the Freemasonic Ideal to all the world.
5. Therefore, we decided that the "DELPHI" International Mixed Order be solely represented by the Supreme Council of the 33º and by the International Grand Lodge, under whose aegis are all Lodges, Grand Lodges, and National Organizations of every country.
6. We consent that all work in all the Lodges, Grand Lodges and National Organizations open and end for the Glory of the Grand Architect of the Universe.
7. We believe that Freemasonry is a Universal institution originating from itself, derived from Reason, and its objective is the search for Truth. We consider that the Right to choose freely the religious and political beliefs, the Philosophy, and the Science is an essential value that advances the evolution of modern men and women.
8. As Free Masons, we accept the Absolute Freedom of Consciousness and the absolute Tolerance, respecting any creed or dogma.
9. We regard the Universal Freemasonic Tradition as the source from which we derive moral values and the route that leads to Self-understanding.
10. We firmly believe that the character of Freemasonry is a traditionally philosophic, progressive, and philanthropic Organization, striving to be at the forefront of social progress and aiming at the moral and intellectual improvement of the individual and the society.
11. We believe that the exercise of virtue and the development of solidarity inside the Lodges strengthen the will of the Freemasons to continue with their intellectual and philanthropic work in the social environment aiming to improve even further the brotherly bond between all the people of the world.
12. We maintain that Freemasons have the duty to defend their cultural and intellectual inheritance, their home country, and their Individual Rights and to resist by words or any other legitimate means against tyranny, totalitarianism, and any form of discrimination.
13. As citizens of the world, we are obliged to materialize the vision of a Universal Brotherhood through the development of the Absolute Freedom of Consciousness but at the same time, we upkeep with pride our own identity and our traditions.
14. We Freemasons consider that the Love towards our fellow humans is not limited to moral support and philanthropy but extends to the defense of the individual's honor.
15. We give great importance to the family because its members are not simple biological units but they are also the connective means for the moral, intellectual and spiritual foundation of the human race. For the Freemasons, the dedication to their family is a solemn and essential duty.
16. We consider the entrance of women to our Lodges according to our traditions as of special importance, since they restore the continuity of the historical, spiritual, and intellectual role of women from antiquity until today.
17. We, as Freemasons, respect the undisputed Equality of all people, believe that all people are born free, remain free, and should have the same rights regardless of their nationality, religion, race, gender, social status, and origin.
18. We reject any effort to deprive people of their inalienable Rights, having to do with the Freedom of Consciousness, thought, and speech, the right to live, to work, and to be happy.
19. We believe that citizens of every country should have the privilege of expressing their Will through direct or indirect voting of their institutions and laws which they all have the obligation to respect, subjecting themselves to the Majority Principle.
20. Lastly, we the signatories, have the highest duty to uphold the traditions of Freemasonry and to inspire the members of our Order in their devotion to the duty of defending the entity and the honor of our Brotherhood.
The signatories of the Founding Declaration of the Supreme Council of the 33º :
Supreme Grand Commander
Deputy Grand Commander
Grand Orator
Grand Chancellor
Grand Treasurer
Grand Keeper of the Records
Grand Master of Ceremonies
Grand Tyler
Grand Commander of the Guards
Vassilios Patkas,33º
Emmanuel Delakis, 33º
Nikolaos Panagopoulos, 33º
Sofia Kapetanaki, 33º
Konstantin Marinos, 33º
Maria Giotaki, 33º
Dionyssios Tortorellis, 33º
Panagiotis Zervos, 33º
Demosthenes Sirmis, 33º
947 West Folsom Ave
Salt Lake City, UT 84104
Tel: (801) 898-2197
secretariat@delphiorder.us
Copyright © 2022  INTERNATIONAL MASONIC ORDER DELPHI.  All rights reserved.